Equities continued to face pressure with most major indices posting a new closing low this week. The downside was muted by a sharp rally on Wednesday that left most domestic indices down 2-4% on the week. The policy response to the Russia Ukraine war has been a shock to the market with the most extreme measures being taken. As noted previously, these will impact NATO countries with significantly higher commodity prices. The Bloomberg U.S. Aggregate Bond Index was down 0.5% on the week as yields moved higher and corporate bond spreads widened.

This week brought unprecedented moves in commodity prices. Oil reached $130 per barrel before paring gains. Nickel has averaged about $20,000 per ton over the last five years. The price would go from $30,000 up to $100,000 in two days and cause controversy in the process. A major Chinese player was short, but the London Metals Exchange opted to cancel trades. They said this was to ensure the entire nickel market didn’t collapse. The price now sits about $50,000 per ton. Nickel is a major input to batteries used in electric cars. Gasoline would trade up more than 30% in five days to reach its highest level ever going back to series initiation in 2006. Coal prices traded up to 300% higher than pre-pandemic peaks. Wheat prices have doubled in just over a month.

The Fed completed its last day of quantitative easing the day before the Consumer Price Index came in at 7.9% versus the prior year. Fed Chair Powell guided to a 25-basis point hike next week, which caused the bond market to remove any likelihood of a 50-basis point increase. The European Central Bank (ECB) spoke dovishly in reaction to the war, but in their meeting today suggested that they may need to end asset purchases sooner. This caused countries like Italy to see a 10-20 basis point increase in their government bonds. Inflation in the ECB is running in the mid-5% range, but the ECB is holding to their transitory view and anticipates 2% next year.

Next week we get the Federal Open Market Committee meeting where they will update their anticipated rate hike plan as well as detail immediate plans regarding quantitative tightening. The market continues to expect at least six increases this year, however, many yield curves within the fixed income space are inverted to levels that are associated with 0-2 hikes left in the cycle. One example is the fact that the market is pricing in rate cuts to begin in 2024. 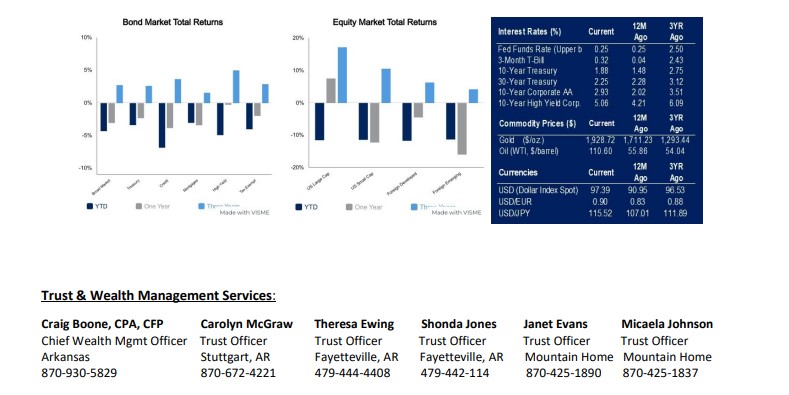